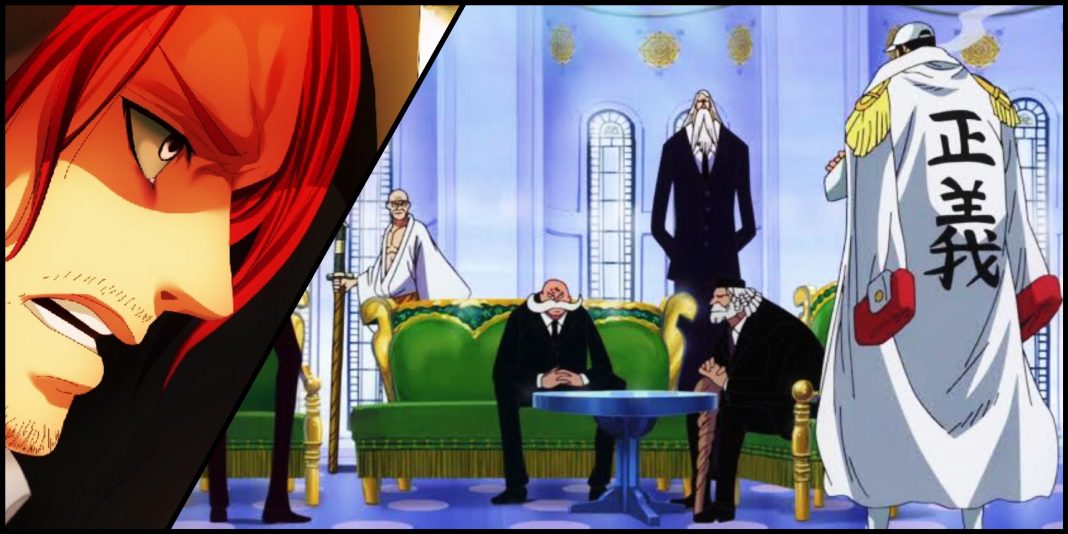 The recent Reverie mini-arc revealed an interesting relationship between the guardians of Raftel, the Gorosei, and the Yonkou Shanks. He seemed to actually offer them advice over at Mariejois, something that surely sparked some discussion regarding his role. Today we are going to try and gain some insights about the aims of the World Government in One Piece, as well as the resulting relationships that stem from those aims, between them, the Yonkou, and the other important figures in One Piece.

From the recent it has become evident that the most prominent figures in the World Government’s hit list are Monkey D. Luffy and Blackbeard, or Marshall D. Teach. However, it’s interesting to note that none of the other of the 4 emperors are part of the list, which feels quite conspicuous. Why is that? Why do the Gorosei find Luffy and Blackbeard the most important threats to their regime, while they don’t feel the same for really important characters, such as the other Yonkou, thus Big Mom, Kaido and Shanks?

At the moment, the three aforementioned Emperors are certainly more powerful and influential than Luffy, and maybe even Blackbeard, judging not only from their individual powers but from the people they have influence over, as well as the territories they govern. Let’s remember Whitebeard. He was sick, however, he and his allies wrecked havoc on the Marine headquarters and managed to equally fight against most of the World Government’s forces. Imagine what the other Yonkou can do, especially if they combined their powers. So, why is it that this power of them doesn’t seem to be that of a threat in the eyes of the World Government?

A good conclusion we can reach is that the World Government is not really that concerned about the power of the Yonkou, but are more interested in the ambition of each individual. This trait seems to be the one that worries them more than anything.

If we remember, the World Government freaked out when Shanks met with the deceased Whitebeard. But why so? It seems that they are creating safety measures, in order for the Emperors not to meet each other. Judging from this, it seems that what concerns them the most is the possibility of the Yonkou reaching common ground and collaborating with each other. This exact possibility was what freaked them out in the meeting of Shanks and Shirohige.

Apart from collaborating there is also the fear of the Yonkou destroying each other. And why is that a problem? Let’s remember that the role of the Yonkou is to keep the balance of the seas of the New World intact. And that exact balance is actually beneficial for the World Government. That’s the reason that they don’t want any Yonkous to destroy each other out. They need the ones that keep the balance working. And this balance works in their favor.

The problem with Big Mom and Kaido is that they don’t have any ambition to unify the pirate world. Big Mom only creates alliances with those that carry her blood, and the other hand, is only interested in destruction and eventually dying. They also don’t have the power to kill each other off. As a result, they actually are an asset to the World Government, keeping the balance they so crave, with the control over their pirates and territories. The same holds true for Shirohige. He was a pirate whose only ambition was to create a family of his own, nothing more than that. Both of them are and were in a sense an asset to the World Government. What’s more, they don’t seem that interested in finding Raftel, something they could probably try and do, with all the power they possess. They are just complacent and focus on their business. They don’t try to achieve any disturbing feats.

The Commonalities of Luffy & Kurohige

Luffy and Blackbeard have some things in common, that result in them being at the top of the World Government’s hit list. They are both pirates that have the ability to unify the pirate world, each in their own way. Teach by ruling over it, and Luffy by getting people to follow him. Furthermore, they both have enormous ambitions. They both want to become the Pirate King and find the One Piece. However different those two may be in their ways, they have these common traits that make them extremely dangerous for the World Government. And the reason is that they both have a huge potential to influence and disrupt the balance of the ununified pirate world. That’s what the Gorosei and Im-sama must be fearing the most. Let’s not also forget that Luffy has Robin in the crew, who is one of the few people who can read the Poneglyphs, which seem to hold the solutions to the puzzle of the Void Century and possibly Raftel.

The Role of Shanks

Shanks is an interesting one. He is a pirate who certainly has the ability to unify the pirate world, or at least the potential to do so. However, he hasn’t exactly shown that ambition up until now, at least not evidently. Given his crew’s power and his past, being a former member of the Roger Pirates, it seems weird that he hasn’t tried to find the One Piece and Raftel, and become the Pirate King himself. Why hasn’t he really? Does he know something which makes him behave the way he does?

He doesn’t seem to be considered a major threat to the World Government. In fact, they even seem to have some connections between them. The reason is probably that Shanks’s actions are ones that facilitate peace, thus keeping the balance we talked about before working.

In all of these though, Shanks seems to be betting on the New Age. He told Whitebeard that he gave Roger’s hat to Luffy, because he decided to make a bet on the new generation. Through his actions, he seems to be trying to pave the way for the change that is coming. He is trying to steer this inevitable change in the way that he believes is better, probably towards Luffy and away from Blackbeard. Shanks doesn’t believe that he is the person to change the world, but the person to steer the world into the right change.

Shanks and the Gorosei

To summarise, Shanks and the Gorosei seem to have similar goals at the moment, in the sense of wanting to maintain the balance of the world. Let’s not forget that Shanks stopped Kaido from intervening in the Marineford War, and also didn’t take part himself, apart from trying to stop the war. The reason is he doesn’t want any radical change in the world, and he doesn’t want to risk the balance. That’s the reason him and the Gorosei probably have a respect for each other. Shanks’s goal at the moment is to stop Blackbeard and open the road for Luffy to become the Pirate King. And he’s trying to use the Gorosei for that goal as well.

This discussion/theory regarding the World Government’s and Shanks’s aims in One Piece was inspired by the great Joy Boy Theories. You can find the original theory here. Credits go there, be sure to check it out. Really liked the idea so decided to give some written thoughts here. For a video version click below.

Question of the Day: What is the role of the World Government in One Piece and their relationship with Shanks? Eager to hear your ideas below.