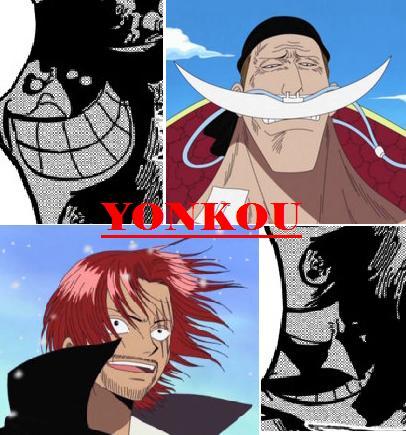 Hello everyone and Happy New Year! May 2017 bring happiness, health and creativity to you and your special few ;). After a big holiday break(and some personal/work responsibilities after that :P) we are back with a theory about the New Yonkou and who they are gonna be in the future of the series.

Since the yonkou were introduced, i have been intrigued by them. The strongest pirates of the sea who rule the New World? Shanks is one of them? I couldn’t wait to see them in action. When we had the chance to do that in Marineford, i just couldn’t stop watching.

Up until now we have only seen one change in the four emperor line-up. The fall of Whitebeard and the rise of the abominable Blackbeard. But before this happened, the four original Yonkou seemed like legends before our eyes.

Edward Newgate, the man who in his prime stood at the same level of power as Gol D Roger. Yes, in Marineford he may have been weaker than the other Yonkou(though that is still up to debate), but he was old and sick and he still wreaked havoc. Imagine him young and vibrant. After all, he kept the position of Yonkou for longer than anyone and he was considered to be the strongest man alive during the war of the best.

Akagami no Shanks. The man who gave Luffy his hat and one of the very first characters that were introduced. His crew is small, but probably they all possess enormous power. You don’t need many members to be powerful, just some elite ones will do the job and i believe that is the case with the Red Haired Pirates. On top of that he only has one hand, yet he still entered the Marineford War with his crew and ended the fights by just showing up!

The King of the Beasts Kaido. What’s more to say about him than that he is the strongest creature alive. Not to mention the fact that he cannot even 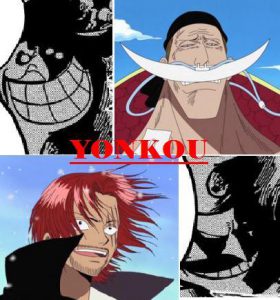 die and that he commands a huge crew of zoan devil fruit eaters like the monster that Jack is.

Big Mom. The only female yonkou and one that can send shivers down our spines. They say that you can’t deny the invitation of Big Mom at her tea party and that truly says it all about her. She really is like the godfather of One Piece.

Marshall D Teach. One of the most hated characters in One Piece and probably the man who will turn out to be the last villain and the ultimate challenge for Luffy and the Straw Hats on the road to One Piece. After all, he was the reason Ace got captured and eventually died. Really powerful possibilites lie ahead regarding him, really important character in the story. Now he even has a hugely powerful crew with the prisoners from Impel Down. Scary stuff!

Let’s start our discussion with the possibility that the landscape regarding the yonkou may change in the future. I believe it is wise to stay open-minded in the chance that the yonkou in the future may not be what they are now. What if more than 4 emperors emerge?

What i mean is, that given the numerous powerful pirates that have emerged in the New Generation, it could be really possible for the balance of power to change in the New World. It could turn out to be, that more 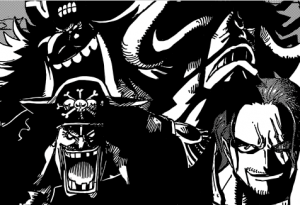 than 4 powerful pirates will be needed to rule the New World and keep the balance of power intact. Not to mention the continuing threat of the World Government and the Marines, who moved their base in the New World wanting to establish themselves as a power to be reckoned with.

That being said, let’s talk about certain characters that may play a big role in more detail.

X-Drake is now a part of Kaido’s crew, something that could have been expected due to his ancient zoan devil fruit power of T-Rex. It has been said he has an interest in reptiles and astrophysics, which indicates a possible high level of intelligence. A former Marine, which means he has a deep understanding of their inner workings. In the Sabaody Archipelago arc, he managed to stop the fight between Urouge and Killer, two other members of the Worst Generation like him, alone. That only shows a glimpse of his strength. A force to be reckoned with, having power, intelligence and knowledge of the world of One Piece.

Another one from the Worst Generation, Tragalgar D Water Law. The question is, does he really want the One Piece? Not sure about that, because getting back at Doflamingo and bringing him down was his top priority and life goal till now. He fortunately survived this one, so now what? A really intelligent character, who knows how to be patient and plan, will play some major role in the New Yonkou landscape. Let’s not forget the immense power of his devil fruit. It may also prove to be a major tool to be used by the Gorosei. For more on that, check our National Treasure of Mariejois theory.

He seemed to possess a lot of potential, however his unfortunate encounter with Kaido, resulted in him getting beaten up and captured. His part of the story became interesting again, when Kaido told him to tell Luffy and Law that they are basically doomed after taking down Joker. This may get him back to the story, probably with some type of revenge, helping Luffy and the whole alliance to take Kaido down. That could potentially make him an important part of the future Yonkou landscape.

A few thoughts about Bonney. Many theories have emerged about her possible connection with Big Mom with all the eating and stuff. Also, about her possible age altering fruit, and the possibility of her being older than she looks, thus having a lot of experience regarding the world. Interesting character as well.

I’m really interested in Basil Hawkins for two reasons. We don’t know what has become of him after the encounter of the Kid-Apoo-Hawkins alliance with Kaido. He probably escaped, which is pretty noteworthy considering Kid got beaten up and Apoo became one of Kaido’s crew. Did he just use their sacrifice to escape, or his devil fruit power helped him by predicting the future? And that is the second reason. A future predicting devil fruit. I really wonder how it will affect things in the New World.

Both are now the subordinates of a Yonkou. Bege of Big Mom and Apoo of Kaido. Could it be that they will play some role in taking down the two Yonkou from the inside? Quite possible.

We have talked about how underrated Urouge is in our theory here. That being said, i think Urouge belongs in the sky. Maybe some ruler/yonkou of some kind, that could potentially lead to a clash of him and Enel, as we have already said in the theory.

The biggest troll character in One Piece i believe. He has a huge following right now and a really versatile devil fruit that helps him escape many dire situations. It seems that luck is favoring him a lot. For me, if he doesn’t become the Pirate King, he will certainly be a Yonkou :P!

Luffy will be the Pirate King, we all know that :P. Will he also be some type of ruler of the sea or emperor before that? Will he be a part of the New Yonkou landscape? Quite possible, but not certain. He may become the Pirate King straight away, or he may become an emperor and after a timeskip achieve the level of Pirate King. Can’t wait to hear your thoughts on the New Yonkou. Be sure to like our facebook page and join our mailing list for updates(form in the sidebar). Cheers!