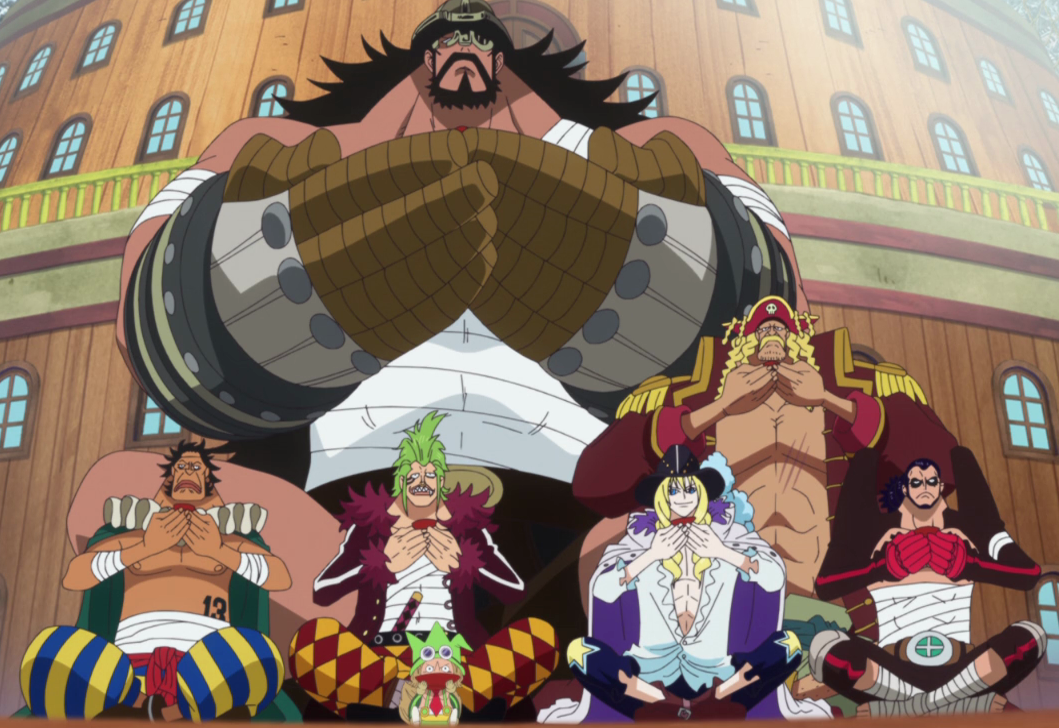 In today’s post we will be talking about the Straw Hat Luffy Grand Fleet, its true power and the major incident it is supposed to cause in the future of the series. But first things first, what is the Grand Fleet of the Straw Hats and how did it come about?

For those unfamiliar with the Dressrosa Arc, the Strawhat Grand Fleet was formed at the end of the arc, after Luffy’s victory against Doflamingo. It is comprised of seven organisations, that are represented by certain gladiators who participated in the Corrida Colloseum, and helped Luffy and the others at the fight against the Donquixote Family. 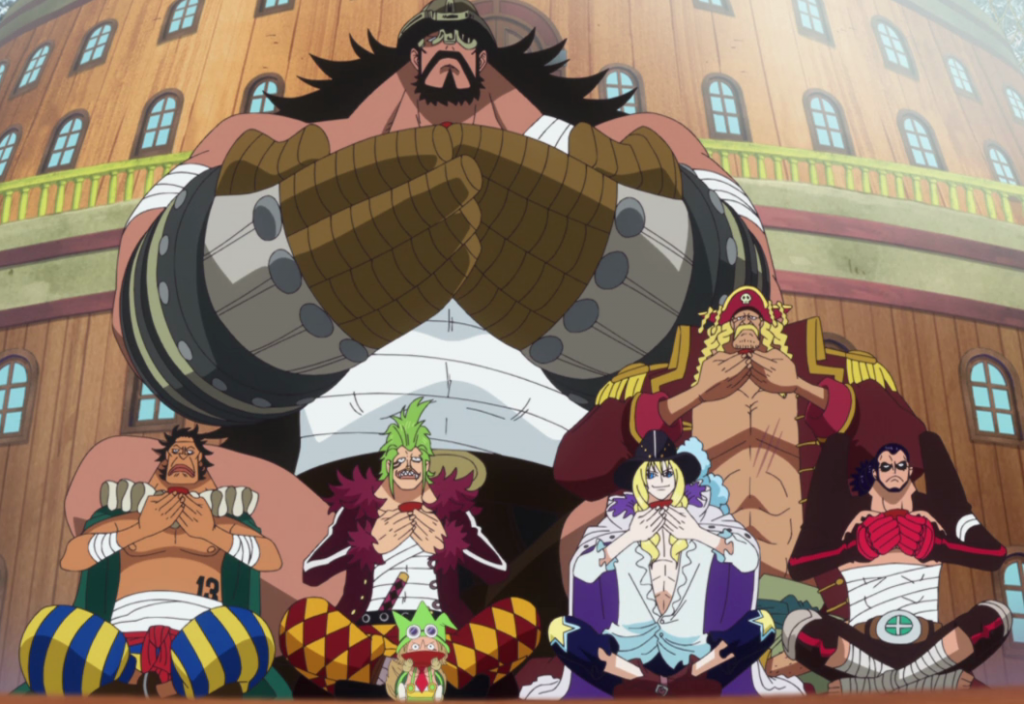 Lets briefly state the seven groups and their respective leaders.

All the leaders and some members of the crews participated as gladiators at the Corrida Colosseum and were turned into toys by Sugar. Because they were saved by the whole operation of the Straw Hat-Law alliance, and the victory of God Usopp against Sugar, they all decided to help the Straw Hats during the fight against the Donquixote Family. After this was over, they decided to dedicate their powers to Luffy and the Straw Hats, forming the Grand Fleet.

The crew is immensely powerful, if we consider the fact that they are all crews who have managed to survive in the New World. As well as that, some of the leaders have even defeated executives of the Donquixote Family. The whole fleet numbers 5640 members in total(making it the largest known pirate group) and their bounties combined are second only to the Beasts Pirates of Kaido and the Straw Hat Pirates. However, we don’t currently know the bounties of other powerful crews to compare.

Power ranking of the commanders

It’s really interesting to try and gauge the power ranking of the leaders of the seven groups. Lets first note that i don’t really think the way the seven fleets are numbered is according to their power. This was just a technical ranking i believe.

For the weakest leader, i believe that would be Leo. The tontattas are really versatile and very useful indeed. However, i don’t think his personal power can go above the other leaders.

The next one must be Orlumbus. Yes he has the largest crew and he must be a great leader and strategist, but it compensates for his lack of personal power. After all, he lost to an executive and that is Lao G.

Next up is Ideo, a determined and powerful fighter, but nothing too special here compared to the others higher in this list.

Bartolomeo with his interesting devil fruit ability and his determination to do everything to win, is one of the strongest commanders of the Grand Fleet, and certainly one of the most loyal ones.

Hajrudin is next. The fact that he is a giant means that he is extremely powerful and tough. However, Bartolomeo may be stronger, this is a tough call.

The second strongest must be Cavendish because of Hakuba. In Hakuba form Cavendish is immensely powerful. However, the fact that he doesn’t control this power keeps him from being the strongest Commander.

The strongest commader of the Straw Hat Grand Fleet is Sai. He is now as strong as his grandfather, Don Chinjao, a man of 500 million bellie bounty. Lets not forget that Chinjao fought on par with Garp in his prime years! He is a leader of 1000 men as well. What’s not to like? 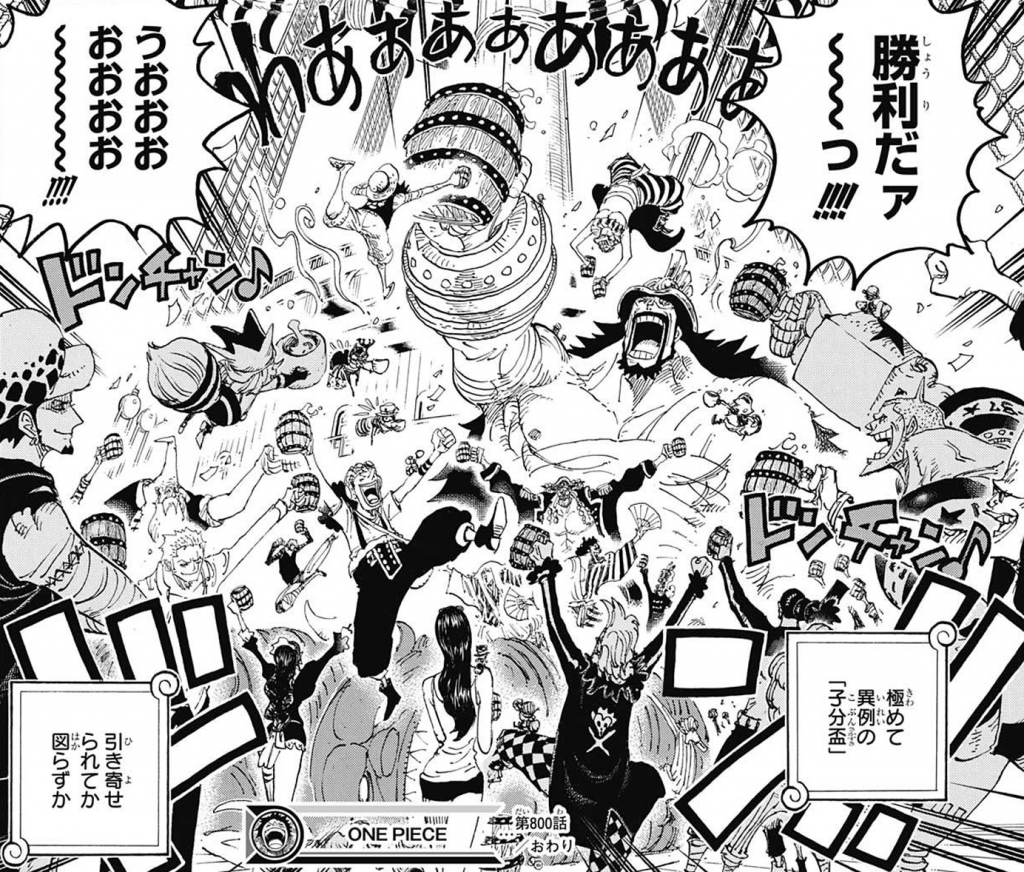 The commanders have some similarities with the Straw Hat crew. We have to point out the Monster Trio similarities. Luffy with Sai(both monkies, famous grandfathers, black hair), Sanji with Cavendish(blonde princes), Zoro with Bartolomeo(green hair, former bounty hunter/mafia leader). Imagine the six of them fighting side by side! The 7 commanders could also link to a fight of them with the 7 Shichibukai or maybe a connection to the 7 deadly sins(Bartolomeo lust, Cavendish envy, Orlumbus gluttony because of huge fleet etc.)

It was stated by Oda in the manga, that the grand fleet will cause a certain incident in the future of the series. The most possible scenario is that they will take part in the final war along with Luffy. He will need their aid in a full scale war like that. They will probably appear much like Whitebeard‘s Grand Fleet appeared, in the War of the Best at Marineford.

The incident of just being a part of that upcoming war is enough for it to be deemed important and mentioned like that by Eichiro Oda. After all, it will be the most important war to date, that will change the tides of history for ever and bring new balances all over the One Piece universe. 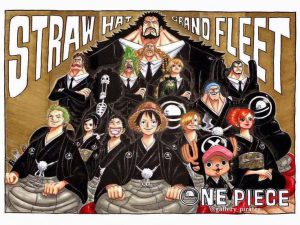 However, knowing the nature of the Straw Hats and most of the members of the Grand Fleet, there is another possibility as well.

What i do believe is possible, is that they may take part in an incident that will cause the beginning of the war. Possibly through a foolish act, or maybe a really bold one(are those two many times the same? :P), they will light the spark that will engulf the seas in a war never before witnessed. It may very well be the Great War Kaido has already foreshadowed.

Lets not forget that the sheer number of members the fleet has can mean great danger to others and will possibly stir things up in the New World just by existing. I also believe that there is a possibility for the remnants of the Whitebeards and possibly Marco to join the Grand Fleet as well, which will mean even more members and more power.

How will they be summoned?

I don’t really believe Luffy will summon his commanders. He didn’t even want to be considered their boss to start with. He may only do so in a situation that he will believe is of utmost importance.

What i think the most possible is that they will come help of their own decision. They may see the danger through Luffy’s vivre card, or just hear the news or read the newspaper and see that something important is about to go down, with Luffy and the Straw Hats as a part of it. Then the epic entrance of them will happen, probably in a dire situation, in order to turn the tides of the battle around.

Will they help with a Yonkou?

I don’t think they’ll come help in every Yonkou fight. They may help by distracting the respective Yonkou’s forces somewhere else. If they helped with someone, that would most probably be Kaido with his army of beasts.

What do you think about the Straw Hat Luffy Grand Fleet and the seven commanders? Share in the comments below. For the old to remember and the new to learn: like our facebook page for updates and check our best recommendations to save you research time here.

16 thoughts on “Straw Hat Luffy Grand Fleet – What will be the major incident?”