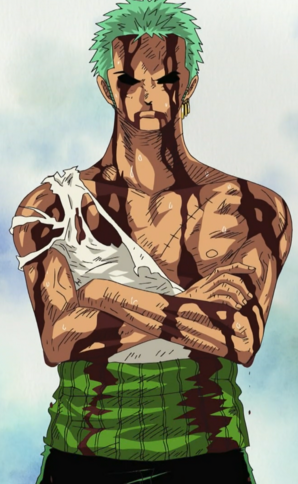 The first mate of Mugiwara no Luffy is a person who at first didn’t even want to join the crew. The former pirate hunter Roronoa Zoro, the man aspiring to become the world’s greatest swordsman. Today’s blog post title is One Piece Zoro Eye, a big mystery surrounding the two year time skip and what exactly happened in the training Zoro had with Mihawk.

The strongest in the crew after Luffy and the person with the highest bounty after him. Part of the monster trio along with Luffy and Sanji and also part of the twelve Supernovas, who were called “The Worst Generation”. After all, the description of them must have been accurate :P.

What happened with Mihawk?

After the two year time skip, Zoro appeared with a scar in his left eye and the eye itself closed. Many speculations have arisen, each one exploring a different scenario. The only fact that is almost certain, is that it must have happened in the time Zoro spent training with Dracule Mihawk. Mihawk 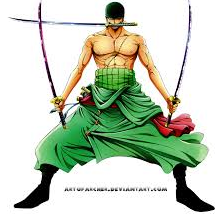 has been shown in a scene from their training being really harsh with Zoro, asking him not to drink booze while they did train. That essentialy shows the type of teacher he is. So, there are two ideas basically that have to do with the way the scar came about.

The straightforward idea would be that Zoro just got injured. It is only logical, after all he was training with one of the greatest swordsmen alive. Maybe he got injured in a harsh training session. Or even in a sparring one vs one battle with Mihawk. All viable scenarios, but could it be that there is more to it than meets the eye? I can’t really believe that Eichiro Oda would explain the scar with such a boring story. So, onwards with some more interesting ideas.

Let’s start with something many of you probably have noticed and could potentially have some meaning regarding the scar. It is that many powerful swordsmen possess some kind of scar in their faces. Take for example the Dark King and first mate of Gol D Roger, Silvers Rayleigh. He has a scar in his right eye, the only difference with Zoro being that Rayleigh’s eye is open(we’ll come later to a possible reason). Also, admiral Isshou who is a renowned swordsman has scars in his face(note as well that he is blind). What could that mean? It is quite probable that swordsmen give some of their vision away, in order to heighten their other senses. 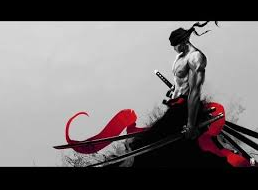 sense things around them. So, it is only logical that this could be a way for them to train themselves. They abandon their vision or some of it, thus training other senses and that way unlocking ultimate swordsman abilities. You must feel pain in order to grow stronger, and powerful swordsmen may have to live with that motto, if the theory is correct.

We have all seen Zoro perform a technique mentioning some demonic spirit called Ashura. A form appeares around him and his attack is fierce. This must be the manifestation of his inner spirit actually, giving power to his attacks and techniques. One might now ask, what that has to do with the scar and the closed eye? Well, what if Zoro has his eye closed as a way of sealing power inside? When he does open it in the right moment, the power will be unleashed and he will be virtually unstoppable. The demon Ashura will manifest in its full form, aiding Zoro to become the fiercest swordsman who ever lived. It is after all a common theme for characters in anime, to keep their fiercest powers sealed in some way. Take for example Zaraki Kenpachi in Bleach or even Tsunade in Naruto for those familiar.

If someone researches a bit about real life pirates, will find something quite interesting. Pirates didn’t have eye patches because they had an injured eye(okay some may had :P). They kept the patch in order to keep one of their eyes accustomed to the dark and the other to the light. Well, what if we expanded the idea to One Piece and Zoro’s closed eye? Could it really be that he keeps his eye closed in order to train? Maybe keep it that way for the sake of haki training?

When he appeared in front of Mihawk and asked him to train him, Zoro had to basically give up his pride. You go back to the person you aspired to 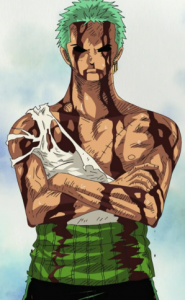 surpass after he defeated you and what do you do? You don’t challenge him, you just ask him for his help. That requires that you do swallow your pride. So, could it be that he went so far as to cut his own eye? Could that be an act of giving up his pride for good, in order to become stronger? Did he sacrifice his eye for that? Considering it is Zoro, it seems possible.

There have been so many ideas about Zoro’s closed eye, that i can’t help myself but mention the hilarious ones. Could it be that Roronoa Zoro is so aloof that he closed his eye and forgot to open it again? Does he actually have a sharingan?(for naruto fans) Has the eye socket become a fourth sword socket? Or is he just half sleeping till time skip? 😛

Why do you guys believe our favorite swordsman in One Piece Zoro keeps his eye closed? Is it some form of training or a hidden power is lurking? Let’s discuss in the comments!