After a pause, we are ready to dig once again into interesting theories. This time, our article is titled One Piece Admiral Fujitora. We ‘ll analyse 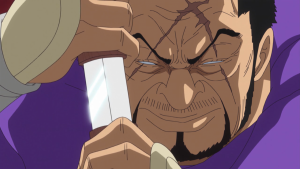 some possible theories regarding the mysterious blind swordsman.

His real name being Issho, Fujitora obviously is his alias. We were introduced to him at the Dressrosa Arc. During the timeskip, two important shake ups happened in the ranks of the Marines. Sakazuki became Fleet Admiral replacing Sengoku, and Kuzan left the Marines altogether.


These two events, left two vacant positions of Admirals. The holes were filled by Issho, aka Fujitora, and the other one by Ryokugyu. Ryokugyu of course is his alias as an Admiral. His other characteristics are currently unknown. He has briefly been mentioned by Doflamingo, in a talk he had with Fujitora, where he called both of them “Beasts”. That is certainly a sign of their power, but we don’t really know anything else regarding Ryokugyu.

When it comes to Fujitora, it is important to mention the reason behind him being blind. It wasn’t an accident, nor was it an ilness or something like that. Instead, Fujitora decided to take his own eyes out and blind himself. His reason? He was tired of all the bad that exists in the world today, and he didn’t want to see the corruption and evil anymore. Thus, he decided to rid himslef of his eyesight. That is an act that shows the character of the man.

On top of that, could it also be that swordsmen get stronger by giving away their eyesight? Remember our article about Zoro’s eye? It certainly can have some correlation to that as well. What if swordsmen can train like that their perception and other senses? What if they developed an unbelievably powerful observation haki?

In One Piece it is quite common for many characters to be modeled after real life characters or actors. Admiral Fujitora is not an exception. More specifically, it seems that Admiral Issho is the blind samurai Zatoichi. The traits that support that are of course their appearance, not to mention that they are both blind :P, and have similar swordsmanship. More specifically,

the single sword using its wooden case as a defense. As well as that, Zatoichi has the habit of gambling, the same with Fujitora.

Fujitora, in one of his very first appearances in One Piece, stated his ultimate aspiration. That is the complete abolition of the Shichibukai system. What can be his reason behind that? There are two interesting explanations.

To start with the obvious, it could simply have something to do with his personality. He seems to have become tired of all the evil in the world and that includes i believe the World Government. It seems quite possible for a person like him to be wanting to change the shady policies of the World Government and the Marines. And of course, using evil pirates for their benefit, while letting them roam free, could easily be something that he despises.

As many of you may have noticed, Fujitora always opens his sword when using his gravity devil fruit power. Could it be that the sword has eaten the devil fruit and not Fujitora himself? Not that uncommon in the One Piece universe.

Another hint for the second explanation lies in the mysterious seventh Shichibukai. He took the role in the timeskip, and we know nothing really about him. Could it be that he is a Samurai? And one that Fujitora has a grudge against? Could it even be that he was defeated by him in the past? Or is he just a shady character that he believes shouldn’t possess the priviledge to roam the seas free?

In a recent post, we talked about the possible connections that exist between Kuina and Tashigi, two seemingly unrelated characters. A part of the theory suggests that a shady hunter of legendary swords was the person that killed Kuina. What that has to do with Fujitora?

Well, what if that evil swordsman was the seventh Shichibukai? What if he was the person Fujitora despises? Maybe the evil man he mentions in the above video, who tried to take over a kingdom like Doflamingo? That could lead to an interesting chain of events. Tashigi may try to kill that man and fail, leaving Zoro the person to take revenge. Maybe with the help of Fujitora? Or could it be that Fujitora also loses to him and Zoro becomes the only force of redemption? Both quite interesting ways the story could unfold.

The Role Of Jewelry Bonney

We know Bonney, a member of the Worst Generation, was captured by the Marines. We also know that she has escaped somehow. It is also a fact that it is immensely difficult, almost impossible for someone to escape the Marines if captured. What if she made a pact with them?

Here is where the pieces connect. Both Fujitora and Ryokugyu are supposed to be Beasts in power and are also quite old. It seems odd that 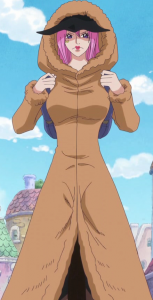 we don’t know much about them and that they just appeared out of nowhere and became Admirals.

Could it really be that in reality they are just elders of the Marines? Important and powerful members that lost their power with the passage of time? During the timeskip, with other tough members like Sengoku and Garp resigning, the Marines lost power and needed members to come back. So, they used Jewlery Bonnie’s devil fruit (she seems to be able to alter the age of herself and maybe others) in order to bring Fujitora and Ryokugyu back in their ranks. In exchange, Bonnie was set free.

It seems quite possible that the two Admirals are opossites in many respects. Ryokugyu means Green Bull, which shows strength. Can it be that he specializes in color of armament haki? In contrast to Fujitora, who is a master of color of observation haki.

Another point that differentiates them is that Fujitora is modeled after Shintaro Katsu’s Zatoichi, whereas Ryokugyu is modeled after Toshiro Mifune’s Yojinbo. For those unfamiliar, they were opposing samurais.

Those facts along with the idea that Ryokugyu may follow the Absolute Justice of the World Government, which Fujitora hates, may point a possible clash between the two later on in the series. Will we experience a type of civil war in the ranks of the Marines? Quite possible considering the different characters that exist in their ranks.

To sum it all up, today’s post about One Piece Admiral Fujitora shows how little we know regarding the two new Admirals that appeared. What is their background and past? What was their role and why were they so “quiet” characters till recently? p.s. Heard of One Piece Burning Blood? Believe me you should :).

2 thoughts on “One Piece Admiral Fujitora – Friend or Foe?”