Lets start with a quick introduction on Cipher Pol One Piece, before we dive right into the theories of the article. Cipher Pol was first introduced to us at the Ennies Lobby arc, where Luffy and the others confronted CP9(a

special Cipher Pol division), due to the fact that they were searching for Nico Robin. We all remember tough opponents like Rob Lucci and Kaku, who turned out to be not what we thought. It seems that the Cipher Pol have mystery and concealment as an important part of the way they deal with stuff.

What are they exactly?

Cipher Pol is basically a series of organisations who work for the World Government. They are as we said above secret agencies, who assassinate, investigate and gather intelligence for the sake of the World Government. The agencies are numbered from CP0 all the way to CP9. Although, in the anime we have only seen members from 5 6 7 9 and 0. The ordinary divisions are the ones from 1 to 8.

CP9 and 0 are two unofficial Cipher Pol units and of course are the strongest ones. More specifically, CP0 is regarded as the world’s strongest intelligence unit. Because of the fact that CP9 have a license to kill any citizen who doesn’t comply with the World Government’s ideals, the must stay a secret agency. Such information can’t be made known to the general public of course. The certain number of members each agency has is unknown and probably varies among the different agencies. The same goes for their strength, at least from what we now know.

The Cipher Pol agents undergo serious training since their childhood in 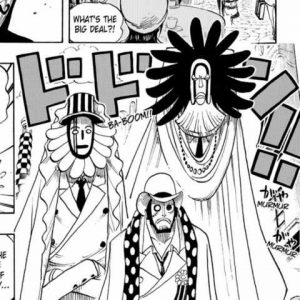 the martial art of Rokushiki. The purpose of it is twofold. Firstly, to help the human body exceed its limits and secondly to mold the mind of the Cipher Pol agent. They should know how to be assassins and let nothing in their lives and minds interfere with that purpose.

We can spot two basic references from real life regarding Cipher Pol. First and foremost, the different divisions that have the initials of the organisation and numbers for each one refer to the british secret agency Directorate of Military Intelligence(MI). CP9 and MI6 as examples. As well as that, Cipher Pol and the real life intergovernmental organization who hunts crime, Interpol.

Lets mention quickly the members of the 9th secret division we all saw at the Ennies Lobby arc. It should be stressed that they were characters with enormous strength, that the Straw Hats struggled to overcome. They had to exceed their powers and level, and grow as characters in order to defeat them. The members we saw there were:

What excites me most is the potential and mystery of the secret and most powerful division CP0. We know so little about them and the possibilities that can unfold regarding them. It has been said that nothing good can come from their presence, and they work directly under the command of the World Nobles. The three members with the masks appeared lately at the Dresrosa arc. We know nothing about them basically but some guesses will be made later on. The other known members of CP Aigis Zero are the former CP9 members Spandam and Rob Lucci with his pet pidgeon Hattori.

After the Dressrosa arc, Rob Lucci was shown speaking with a fellow CP0 member through a Transponder Snail. The voice of the supposed member, as well as its silhouette, were that of Kaku, hinting that maybe he is also a 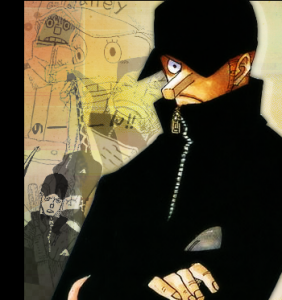 CP0 member. We should proceed with caution with those speculations though, because they are non-canon additions.

Their full name is Cipher Pol Aigis Zero, and it is natural to wonder about the meaning of the name. It could be derived from the ancient greek word Aegis, which is a mythological shield associated with the greek gods Zeus and Athena shown as a short goatskin cloak. It is basically an emblem of protection and power and not a real shield.

Who are the masked members?

The question arises. Who are the three mysterious members behind the masks? If they are new characters we can’t probably speculate much about them, but only maybe from their bodies and appearances. But what if Eichiro Oda has played a game on us? Confused? Stay with me for a while.

We started this article by stating that the basic trait of those organisations are mystery and working under the hood and behind the curtains. They are exceptionally good at concealing their true identities and blending in with the simple people. So, an interesting question arises. What if we have already seen them?

Do we know them?

It seems like an interesting and real possibility that we have seen the masked members of the CP0, well basically without their masks. What if they are characters that we already know? If they can hide themselves so well, their main job being secret investigations, who tells us that they haven’t done exactly that?

We can go to the extreme and imagine that a member of the Straw Hats is one of the CP0 members. Despite possible, i think that this idea is quite far fetched and doesn’t ring well with the vibe of the series. However, there is another more possible idea, although quite extreme.

Where did we see them?

We saw the masked members in the Dressrosa arc. So, the culprits with the highest possibilities are people that were at the island during the arc. An exciting idea is that one of the Colosseum’s fighters is in fact a secret CP0 agent. It would be wicked if one of the people that now follow Luffy, is in fact a secret agent waiting for the right moment to hurt the Straw Hats.

So, what are your opinions about Cipher Pol One Piece? Any interesting speculations on the CP0 members and their role later on? Share in the comments below. p.s. also check out our latest review on one piece action figures 🙂

4 thoughts on “Cipher Pol One Piece – Who are they?”